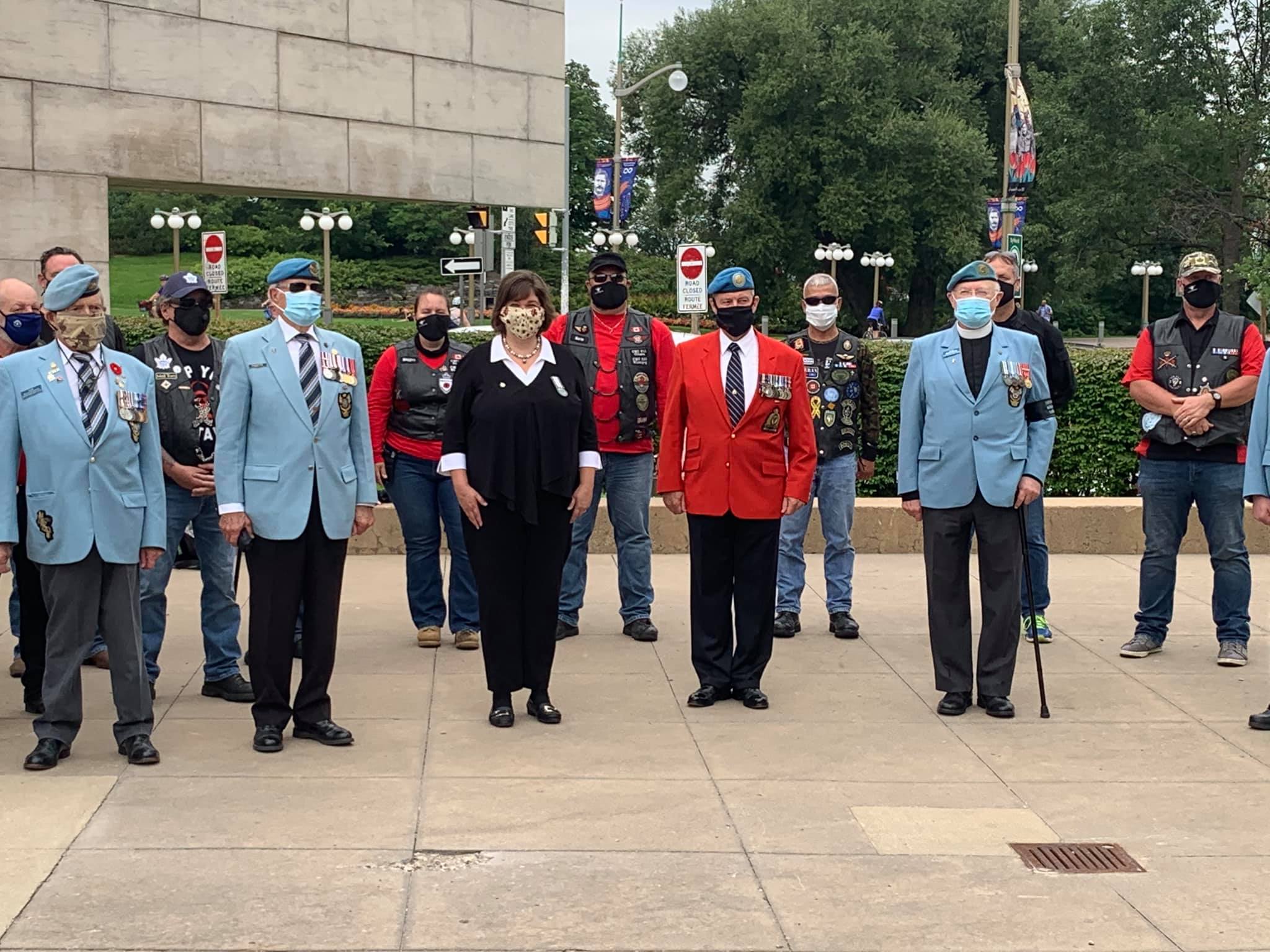 August 9th, 2020 marked National Peacekeepers Day. Anita was honoured to place a bouquet at the National Peacekeping Monument in honour of Canadian military, police and civilian peacekeepers. To those who have fallen, we remember. And to those who served, we honour your bravery and contribution to peace.

Every year a national ceremony is held in Ottawa at the Peacekeeping Monument on the Sunday closest to August 9th. It is organized by the local chapter of the Canadian Association of Veterans in United Nations Peacekeeping, the Canadian Armed Forces, Veterans Affairs Canada and the Royal Canadian Mounted Police. National Peacekeepers' Day was established in Canada in 2008. Ever since then 125,000 peacekeepers have participated in international efforts over the past six decades in countries all over the world. We hold this ceremony to commemorate the 130 Canadians who died in Peacekeeping missions and in particular greatest single loss of Canadian lives on a peacekeeping mission, which occurred in 1974. All nine peacekeepers who were on a UN marked Canadian transport aircraft were killed when the plane they were on got shot down by Syrian missiles during a resupply mission in the Middle East. It was the largest single-day loss of Canadian Armed Forces personnel in a peace support operation.

Anita has build her career fighting for human rights, civil society, and women's empowerment. For her work in Kosovo and Bosnia, she was recognized with the Canadian Peacekeeping Service Medal in 2008. Anita understands the incredible bravery of peacekeepers who have been wounded or killed in action. She knows that her work was possible thanks to the support of the brave, dedicated military peacekeepers.

Canada is a huge advocate for peacekeeping. Approximately 110 Canadians are serving in peace operations as of 30 September 2019 (49 in UN missions). Canadian peacekeepers took part in the Suez canal crisis, Palestine-Israel border crisis, Cyprus, Haiti, Middle East, and currently in Entebbe, Uganda. Following the initiation of operation PRESENCE the Government of Canada provided the UN with tactical airlift support out of Entebbe, in Uganda, during the next 12 months beginning August 2019. On August 2019, the CAF deployed a Tactical Airlift Detachment on a monthly basis to Entebbe to assist the UN’s Regional Support Centre in the sustainment of ongoing UN operations. In doing so, the CAF plays an important role in helping to supply approximately 80,000 military and police personnel as well as thousands of civilian staff on peace support operations across the African continent with critical resources.

2020 marks the 20th anniversary of SC1325. The Security Council adopted resolution (S/RES/1325) on women and peace and security on 31 October 2000. The resolution reaffirms the important role of women in the prevention and resolution of conflicts, peace negotiations, peace-building, peacekeeping, humanitarian response, and in post-conflict reconstruction and stresses the importance of their equal participation and full involvement in all efforts for the maintenance and promotion of peace and security. Resolution 1325 urges all actors to increase the participation of women and incorporate gender perspectives in all United Nations peace and security efforts.