25th Anniversary of the Srebrenica Massacre 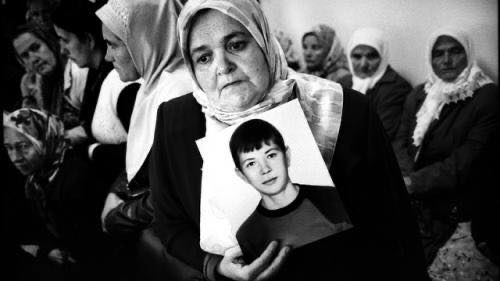 Twenty years ago I was working for the OSCE Mission in Bosnia and Herzegovina in Sarajevo on the 5th anniversary of the Srebrenica massacre. In the small plaza outside of our office, the Mothers of Srebrenica sat quietly, day after day, holding photos of their lost sons, husbands, brothers and fathers. 8,000 men and boys who were taken from what was supposed to be a UN safe haven, shot and buried in mass graves. It was my first direct encounter with victims of genocide. It shook me to the core. At the Sarajevo film festival that year, I saw a short film called ‘Red Rubber Boots’, about a mother who spent years searching for her lost son. He had been wearing red rubber boots the day he was taken, and each time a new mass grave was uncovered, she would go there to look to see if there were red rubber boots on any of the tiny corpses. As of the showing of the film she still had not found him.

Up until my work in Bosnia, genocide and war were things of another generation. My parents and grandparents spoke of WWII in the Netherlands, where my father’s family were part of the Dutch Resistance and my mother’s family used their barn as a safe house for Jews. It was stories told by old people, not my peers. But living and working in Sarajevo just 5 years after the war, it was my peers and my friends who told of the horrors. I could not reconcile the warmth, generosity and kindness of the people, with the horrific stories they told me that they had lived through. How could humans do this to one another?

Every Remembrance Day we repeat “Never Again” and yet here I was at the age of 29 talking to colleagues my own age who had lived it, and in some cases perpetrated it. Bosnia in the summer of 2000 was a broken society. I made friends with women my age who acted and seemed just like me, until they opened up about being raped repeatedly, watching their fathers and brothers shot in front of them, fleeing for their lives with nothing but the clothes on their back and their younger siblings in their arms. When I assumed these were militias from far away who committed these atrocities, I will never forget one of my friends correcting me and telling me “No, Anita, you don’t understand. It was our neighbours. Boys I went to school with all my life, who I thought were my friends, who raped me. I trusted them, we let them into the house. They were not strangers.” And then she told me that these men still lived nearby. Another friend told me that in most societies, we do not know what kind of acts we are capable of. Who are the monsters, who are the heroes and who are the cowards who run away or turn a blind eye. In Sarajevo, not only do they know who they are, but they know the same about all their neighbours too. And yet they have to continue to live together despite the knowledge. He told me I should be grateful for our innocence in Canada, where every person can continue living with the assumption that they would be the hero. He said very few really are.

Most of my international work has been in post-conflict reconstruction. Trying to help societies put the pieces back together after genocide and war, and find ways to live alongside one another again. Fighting impunity, seeking justice and peace - which in some cases are mutually exclusive. There are no easy answers. In Bosnia they told me they just wanted to forget. In Kosovo, where I spent a year, they told me they were not ready for Truth and Reconciliation. When I asked why not, they said “How can I tell the truth to someone I am still afraid of?”. I have seen the inter-generational transfer of hate. And I have seen heroes much stronger than I will ever be work to forgive and to rebuild their lives from shattered pieces that would destroy most people. And I have seen those, like in DR Congo, who simply want justice and an end to impunity so that their daughters don’t grow up being raped and their sons don’t grow up to become rapists. And yet still we say ‘Never Again’. And yet it happens again and again. Not to our parents and grandparents, but today. It is happening right now to the Rohingya, to the Uyghurs and to many others.

Rebuilding a society after war and genocide takes decades and the costs are exponential in human lives, refugee resettlement, rebuilding of infrastructure, economic reconstruction, and humanitarian aid. And often the hatred and vengeance lead to further cycles of violence and war. Preventing conflict in the first place takes international leadership, political will, funding for conflict prevention and democratic development programs, support to civil society groups, especially women, and in some cases the willingness to use force to stop the killing. I am a firm believer in the Canadian-initiated doctrine of Responsibility to Protect. I am a firm believer in UN peacekeeping albeit a much less naive version of it, having learned from the mistakes of the 1990’s in Srebrenica and Rwanda. I believe that Canada is in a unique position to assist countries to build resilient, inclusive democratic governance systems where the leaders are accountable to their people and have the capacity and incentives to find non-violent peaceful solutions to conflicts. We need to act on our commitment to establish a Canadian Centre for Peace, Order and Good Government. We need to build on the expertise of Canadians who are working in countries around the world on democracy, women’s empowerment and peace. This year is the 20th anniversary of UN Security Council Resolution 1325 on Women, Peace and Security. It provides a significant opportunity to change the way war and conflict has been perceived through the lens of the Nation-State and look at it through the lens of resilient communities in a globally inter-connected world where borders are becoming increasingly irrelevant, cyberspace is becoming the crucible for tribalist hatred, and the geopolitical power structures are shifting increasingly toward authoritarianism. We need to re-engage in UN Peacekeeping and help to shape it to be impactful and relevant in a modern world that is changing faster than policy-makers and institutions can keep up. We need to work together with like-minded countries, including NATO, to reimagine and reinforce the international rules-based order, democracy and human rights. We need to be serious about “Never Again”.

To this day, I am shaken to the core by the memory of those mothers sitting silently in the plaza holding photos of their lost sons. It has been 25 years since Srebrenica but the world has not yet learned the lessons.